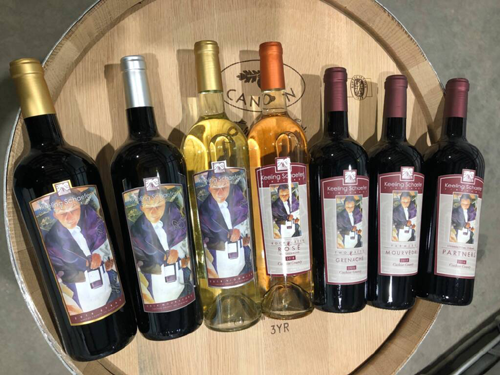 Keeling Schaefer carves its own wine niche in southeast Arizona.

Arizona may not be as well-known for its wines as other U.S. regions, but farmers nonetheless are producing varietals in demand across local markets and beyond in a region capable of producing premium wines. As one would expect with all that has happened in 2020, the state’s wine grape industry was challenged by record heat that will likely affect yields more than it will quality.

Keeling says visitors are sometimes be surprised by Arizona’s wine grape production. While its neighbor to the west can be more popular among wine drinkers, he says folks can be surprised to learn that the natural climate in his region of Arizona is cooler than popular California regions like Paso Robles and the Napa Valley.

Not so this summer.

Arizona is coming off a record-breaking summer that saw temperatures in some parts of the state exceed 110 degrees for 50 days. This is uncharacteristic for even Phoenix, which can see between 20 and 30 days a summer above 110 degrees.

Keeling Schaefer Vineyards is nestled in a basin and range area of southeast Arizona. These basins and ranges tend to run north, south, creating rain shadows and wetter microclimates. At nearly 5,000 feet in elevation, Keeling’s vineyard is on one of those wetter westward facing slopes that overlooks the Willcox Playa. His microclimate on the side of the hill tends to be cooler than the valley below. It is also along the wetter side of the valley. Because of this, bud break and harvest are about two weeks later than nearby vineyards.

Arizona’s record heat earlier this summer may have impacted yields about 25%, Keeling said. Time will tell whether this year’s crop has a favorable flavor, or it too suffered under the relentless heat.

“Our temperatures were consistently in the high 90s around here this summer with little nighttime recovery,” he said.

Keeling says this is uncommon for his location on the western slope of the Chiricahua Mountains. Also uncommon this summer was the lack of monsoon moisture, heavy rains borne by tropical moisture and thunderstorms that move northward from the Gulf of California from mid-June through the end of September. Much of the annual precipitation his vineyards receive falls during the summer monsoon period. The balance falls during the winter months.

“We usually reduce our irrigation by now, but this year we haven’t been able to,” he said.

Keeling says his summers are typically cooler than popular regions along the California coast, including Paso Robles and the northern Napa Valley. This can surprise some people, he said.

Winter and early spring can sometimes be challenging in the high elevation desert region. It can snow, but worse than that can be those rare cold spells like he saw in 2011 when the temperature hit zero degrees for two nights.

“It really damaged a lot of vines,” he said.

The dry climate in late winter and early spring also lends itself to inopportune frosts during bud break. Since he installed fans a couple seasons after planting his first vineyards, he has seen an improvement in frost management.

Part of that management includes a good vine health program at harvest and irrigation management during the drier winter months.

Producing his own wines from his small winery isn’t about producing large volumes. One of the reasons he likes what he does is how wine varietals can differ in taste from year to year. It is not like beer or cola where each can taste the same, regardless of container or when it was made.

“Wine is not a commodity in many ways,” he said. “While there is some of that, what makes it interesting is that there is so much variety and difference.”

Though there are vineyards in the region, they are not wall-to-wall and other crops that can harbor leafhopper and other pests are not present in the area. Still, this did not prevent the Glassy Winged Sharpshooter from hitchhiking in loads of plant material to a popular store in Sierra Vista years ago. Keeling, a past president of the Arizona Wine Growers Association, said the State of Arizona got involved after discovering Pierce’s disease in some of the state’s wine grape vineyards. Though Arizona did not eradicate the leafhopper, “we haven’t had a problem with it since then,” he said.

Keeling and his wife, Jan, own Keeling Schaefer Vineyards, located about an hour’s drive south of Willcox, Ariz. Sampling and buying their wines is as easy as visiting their tasting room in the historic 1917 Willcox Bank and Trust building in downtown Willcox, a small community easily accessible to travelers along the I-10 corridor.

Keeling crushes his own grapes and helps nearby vineyard owners crush some of their grapes.

Arizona consumers like their wines, he says, noting that the state of seven million people is one of the top wine markets per capita in the United States. Keeling says one popular grocery store in north Scottsdale is the top retail location for wine sales in the world.

Arizona has a “buy local” agricultural campaign, which seems to fit well with the attitude of wine drinkers in the state, he continued.

Unlike other wine regions, which can charge over $100 per bottle for their premium wine, Keeling likes to keep his prices less expensive – typically under $40 – as he perfects his niche for premium varietals. Wine is available through his tasting location in Willcox and from his wine club.

Keeling grew up in a farm family near Casa Grande, Ariz. His brother farms their grandparents’ place, which dates to the early 20th Century when the family moved to the area from New Mexico. As an adult, Keeling stayed out of farming. He spent part of his adult life as a pilot. Later he worked with the Arizona Department of Commerce in economic development.

“My first career was flying.”

Keeling Schaefer Vineyards is in its 17th leaf and he is in his 16th commercial vintage as a wine maker.

Today Keeling is happy growing wine grapes and producing wine from a location he says can produce grapes for premium wines. Some of his wines have scored in the low 90s in different competitions.

“I make all the wine here,” he said. “I’m more interested in the farming side of things, but when you’re this small you’ve got to be vertically integrated.”